Mahyad Tousi is a multidisciplinary storyteller and co-founder of BoomGen Studios and Starfish. BoomGen Studios is the premier pipeline for developing and launching premium entertainment media about the peoples, myths, and cultures of the Greater Middle East. Starfish is a first of its kind, creative accelerator investing in premium IP from proven artists of color: no string attached, all trust, empowerment, and community. Starfish’s philanthropic partners, Pop Culture Collaborative, The Doris Duke Foundation, and Pillars Fund, rather than take an insular, predatory, zero-sum approach to IP ownership, which is customary in Hollywood, have rooted Starfish in four core principles: radical ownership, authenticity, transparency, and community. Starfish launched its inaugural cohort in April of 2020. 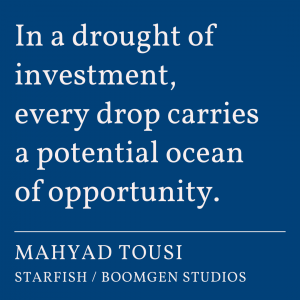 What does “entrepreneurship” mean to you?
MT: As an artist of color who comes from an immigrant background with a “funny” name, I am “the significant risk” I need to overcome to have a chance to do what other people take for granted. For me, entrepreneurship has always been about survival – a way of life from the moment I started working at the age of fourteen.

How did your company come to be?
MT: I was attached to shoot and direct a documentary about the Middle East. It was 2005. The war in Iraq was going “really well.” President Bush had just given his infamous “Mission Accomplished” speech. As a conflict videographer, I wanted to highlight what I had observed firsthand to be the most significant conflict raging across the vast region. It wasn’t a religious or ethnic conflict, but a generational one. The vast majority of the population was under 30 years old. Yet, all the power, wealth, public discourse, and cultural spaces were (still are) controlled by the older generations. Working with author and religious scholar Reza Aslan, we conceived of an idea for telling the story of this “Boom Generation” in real-time: a traditional documentary tracking some of the most significant trends through six different characters; and a tech platform that would allow youth across the region to tell their own stories through text, photography, and short videos, and to connect with each other, share ideas and co-create.

Then, we set out to raise the capital.

The traditional film and TV buyers told us that our perspective was “naive” – ironically, our thesis predicted both the Green Revolution in Iran and the Arab Spring. It also predicted the rise of radical/militant Islamism. The gatekeepers told us to focus on Iran: Bush’s next target in the Middle East. “Talk about the kids on the side,” one powerful TV exec told us. Another observed about this BoomGeneration, “maybe the Persians, but the Arabs are lazy.”

Meanwhile, Silicon Valley investors showed interest in the platform. But they told us to abandon the documentary altogether and to ditch the purpose behind the project. “No one cares about the content. Build the platform. Build the pipeline. Content will come,” one interested angel investor told us.

We were genuinely baffled. It became painfully clear that we had to chart our own path as artists and as entrepreneurs. Reza and I created BoomGen Studios in 2008. We raised two rounds of investment capital shortly after, and we have been plugging away ever since.

All the lessons I have learned along the way informed my newest venture: Starfish – a creative IP accelerator designed to unleash the full market potential for transformative pop culture ideas originating from artists of color. 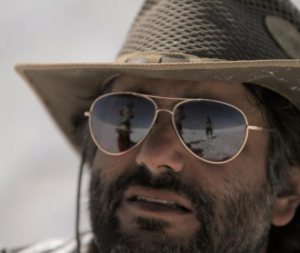 How is your company changing the landscape?
MT: We believe that for storytellers and artists on the periphery of the “mainstream” industry, creative success need not be born out of luck; it can and should come from sound investment. We have designed a hybrid approach to attract funds not just from impact investors and philanthropy, but also from traditional investors who recognize the power and potential of art and culture.

Starfish is a first of its kind, creative accelerator investing in premium IP from proven artists of color: no string attached, all trust, empowerment, and community. Rather than take an insular, predatory, zero-sum approach to IP ownership, which is customary in Hollywood, we have rooted Starfish in four core principles: radical ownership, authenticity, transparency, and community.

The existing business models (if you can call them that) for film and TV—the biggest drivers of our cultural identity—are at best broken and at worst hostile. We advocate for multi-platform approaches to IP creation: digital, animation, interactive, illustrated, VR, experimental, and others. This way our artists can establish a direct relationship with their core communities and fandom through their MVP, powering the expansion of their IP and justifying greater investment. In turn, the Starfish Fund will make follow-on investments in the most promising IP portfolios moving through the accelerator.

What is the biggest experience or lesson gained on your journey so far?
MT: In a drought of investment, every drop carries a potential ocean of opportunity. When it comes to artists and entrepreneurs of color, systematically kept on the margins of mainstream society, there has never been a better time to invest.

What do you wish you knew when you started? Is there anything you would do differently?
MT: I would waste a lot less time trying to impress and taking my cues from “well-meaning” people who occupy positions of power. It turns out they had less of an idea about the future of media and entertainment than I did. It turns out that they were the obstacles me and other artists like myself, folks from “other” backgrounds, needed to find a way around. 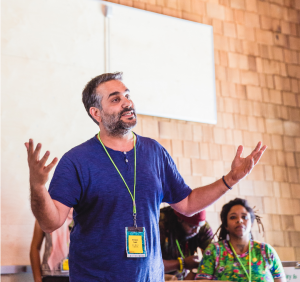 What advice/credo do you live by as you grow the business / what is your professional and personal mission statement?
MT: Get used to failure, but learn to fail better each and every day. This could be a fatherhood lesson that I am now attributing to all my life, but I can’t remember to be honest.

What’s it like to work alone or with your partners? What advice do you have for fellow entrepreneurs about building and leading teams?
MT: Being a leader doesn’t mean controlling every detail of your vision. Communicate as best as you can with your team and trust that the messy process of co-creation and collaboration will usher the most dynamic form of the vision.

Where do you find inspiration when faced with challenges?
MT: For me specifically, and perhaps for others like me who struggle with past trauma, challenges trigger survival instincts, which sometimes serve as a hammer when the occasion calls for more delicate and precise tools. Pausing and reflecting, talking to my wife, trusted advisors, colleagues, and friends have been the most effective way to recover the natural problem solver in me. That’s where you want to get to. If you are not being challenged, it’s possible that you are not doing anything worth a damn. Perhaps that’s harsh, but we have hard and challenging working to do if we are going to make this a better place for everyone.

What does “success” look like for you? What do you think will help you achieve it?
MT: I want to believe in the idea that a rising tide lifts all boats. Yet, we live in a society where the tide tends to benefit a few regardless of which direction it moves. For me, success, health, and happiness are one and the same. Real success has to extend beyond the individual to include a healthy community and society.

Therefore, rather than finding ways to circumnavigate societal problems or leverage them to thrive as individuals, success for me is to be actively engaged in creating a just and pluralist society, where a rising tide does lift ALL boats.

What is your proudest and darkest moment so far?
MT: I have proud moments and dark moments regularly, sometimes at the same time. The entrepreneurial journey has continuously been up, down, and messy. I have learned the hard way that the ups and downs are, at once, rife with opportunities and traps. My proudest moments are when I manage to be the best version of me despite the ebbs and flows.

What lesson did 2020 have for you? What do you look forward to in 2021?
MT: Whoever said, “May you live in interesting times,” must have been a troll. I learned this year, along with everyone else, that nothing is promised. Having discovered that lesson, I look forward to whatever 2021 throws at me. With that said, I sure as hell don’t look forward to more division, vitriol, toxicity, disease, and (potentially) more Trump.

Many entrepreneurs continue to perfect their daily routines to support their work and greater vision; would you mind sharing your morning routine or a regular ritual that grounds your work each day?
MT: I am a father of two rambunctious boys (3.5 and 7). I learned quite early to surrender the idea of daily routines. I learned quickly to leverage my desire to spend time with my children to make tough choices and be brutal with my schedule. I now get more done, and better, in half the time it took me before I was a father. To paraphrase my idol Bruce Lee—as incredible an entrepreneur as any: “Be like water,” with your routines and rituals. Surrender. It may seem like chaos, but there exists a profound order and symmetry in chaos.

What kind of an entrepreneur do you want to be known as, as in, what do you want your legacy to be?
MT: To be honest, I struggle with these kinds of questions. Here’s what keeps me up at night: How can we (as a nation) imagine a shared future if not through the dominant stories that define our communities and shape our culture? And, if so, how do we address the narrative deficit disorder that plagues our culture. There is a common thread that runs through every organization that I’ve founded; from BoomGen to the Starfish Accelerator, and soon the Starfish Fund; my goal is to create a truly equitable ecosystem wherein creators of color can thrive and tell stories that will transform the world. I want my two boys to grow up in a society in which they can see their own lives and the lives of all their friends reflected in the stories they read, watch, share: the stories of their lives.

Starfish is a first of its kind, creative accelerator investing in premium IP from proven artists of color: no string attached, all trust, empowerment, and community. Starfish’s philanthropic partners, Pop Culture Collaborative, The Doris Duke Foundation, and Pillars Fund, rather than take an insular, predatory, zero-sum approach to IP ownership, which is customary in Hollywood, we have rooted Starfish in four core principles: radical ownership, authenticity, transparency, and community.

Do you have someone you’d like to nominate to be profiled in our Faces of Entrepreneurship series? Please let us know by emailing media@thecenter.nasdaq.org.